Pittsburgh Penguins’ Sidney Crosby scored his 1,000th goals in 757 games and he received a plaque from Mario Lemieux at the beginning of the game. From Canadian to Canadian…1000th goal scorer to another 1000th goal scorer. Kids on the ice before the game playing hockey. Got to love the kids. Then the game begins. Lets just say the Detroit Red Wings came to play today. Defense Man, Nick Jensen, started the day off with a nice fake off. I mean he faked the goalie, Matt Murray, out. I mean, he faked the shot and Matt Murray went for it. He froooze the goalie. Murray gave his guard up and Red Wings and St Cloud State Huskies’ Defense Man, Nick Jensen, just went around the Goal tender Matt Murray and scored the goal. Nick Jensen, 3rd Goal of the year. That was a nice move. Faked the goalie, his head was up and easy goal. He got the assist from Left Wing Detroit Red Wings and Michigan State Spartans own Justin Abdelkader and Center Andreas Athanasiou.

Red Wings lead 1-0 in the 8th minute with the Nick Jensen’s goal. The game

just getting started. Pittsburgh Penguins wasn’t going just fall back. In the 14th minute, Right Wing, Tom Kuhnackl, scored his 3rd Goal of the year with a shorthanded goal from an assist from Defense Man Kris Letang. Defense Man Letang gave a nice pass sort of fast break pass for an open lay up or dunk in basketball. It was nice because he waited for that play to develop and come into life.This game was back and forth till the 16th minute, when  Detroit Red Wings’Center, Steve Ott, scored a goal assisted by Center, Riley Sheahan. Center Steve Ott got the goalie Matt Murray with a back hand to score that goal ;Detroit Red Wings wining 2-1 at intermission. 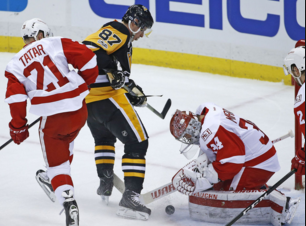 Anthony Mantha and Sidney Crosby got a little beef going on, LOL. They going at each other. Both of them got a 2-minute penalty for slashing. Pittsburgh Penguins’ Sidney Crosby not playing around. Red Wings’ Goalie, Petr Mrazek, playing good; making good saves left to right, right to left. Red Wings playing good today with scoring two goals in the 3rd period. Left Wing, Tomas Tatar, scored the goal with the assist from the Left Wing,Henrik Zetterberg and Anthony Mantha. Left Wing, Thomas Vanek, scored an unassisted goal to give the Detroit Red Wings a 4-2 lead. Sidney Crosby wasn’t playing that he came back minutes later with scoring a goal with the assist from Center Jake Guentzel. Pittsburgh Penguins’ Sidney Crosby who has his 32nd goals in the NHL Season making him the number one goal scorer in the league so far. Good physical game so far.

Alex Ovechkin, the Left Wing, scored in the 17th minute on a power play with assist from the two Centers: Lars Eller and  Evgeny Kuznetsov. In the second period to tie the game up, after the New York Ranger took the lead in the first period, with Right Wing, Mats Zuccarello, scoring the goal getting assisted by Chris Kreider and Mika Zibanejad. The game was tie till the 3rd period. I don’t know what Brook Orpik was doing getting two penalties in the 3rd period. The first one was in the 15th minute with 2 minutes penalty for interference and in the 8th minute for holding. The game was already tough enough can’t be letting penalties like that stop you. That’s how the New York Rangers gets Power Plays and make the game easier for them. 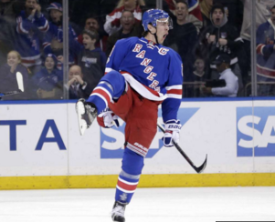 The game was closed over in the 3rd period in the 7th minute and 49 seconds. Defense Man, Ryan McDonagh, scored a goal getting that nice assist from Rick Nash and Derek Stepan. Ryan McDonagh looks like a Defensive…geez…broo looks touugh. That was the game winner since the New York Rangers won 2-1. New York Rangers doing good this week with the exception of the New York Islanders lost. They playing tough now like grrrr.

Both goalies played good this game as it was a close game. But the team who wants it the most pulled it out. Henrik Lundqvist, Ranger Goalie, had the most saves with 31 (.969 pct) while Washington Capitals’ Philipp Grubauer had only 28 saves (.933). Henrik Lundqvist ties Chris Osgood with 401 wins for the 11th most wins in NHL history for a goalie. New York in Hockey day in America on NBC pretty good on a Sunday. Looking good in a packed arena in New York City, Madison Square Garden.

Columbus Blue Jackets vs. Pittsburgh Penguins on Friday Night. I knew this was going to be a close game. Two good teams going at it. It was going to be a game of heart. Till the end, they battle. They went at each other. The team with the best goalie won.The game was scoreless in the 1st quarter. The second quarter both teams score a goal. Ian Cole, a defense man, scored a goal; and Defense man, Ryan Murray, also scored. The game was scoreless till the end of the 3rd quarter, which means this game went to overtime in which you know it got to be a good game if it went to overtime. Both teams wanted this W. 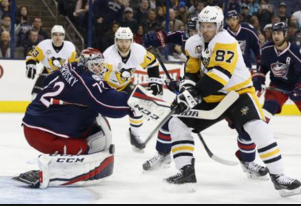 Sergei Bobrovsky played good for the Blue Jackets; he has 38 saves and was doing his goal tending thing especially against a good team like the Pittsburgh Penguins. Matt Murray, Pittsburgh Penguin goal tender, played good too just not as good as the Blue Jackets goal tender. This game came down to who had the better goalie for the night. Which goalie had more heart. This game was a game of saved and one save was a difference between a Win and a L. 38 saves won the game and 37 saves needed 38 saves to end the game in a tie. 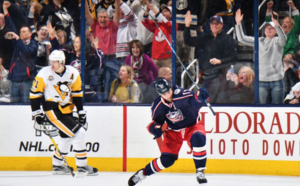 This game went to overtime; and Center, Brandon Dubinsky, scored the game winner to get the Columbus Blue Jackets the winning goal. Columbus Blue Jackets beat the Pittsburgh Penguins 3-2 in overtime. It was a hard-fought W for the Blue Jackets. They are coming to play after they got the work from the New York Rangers. They bouncing back well. I like the way they are playing. They are playing with heart now. Grrr! Straight heart, that’s how you play. This game shows a lot because it was a heart game. Looks like Center, Sidney Crosby, had quiet night, no goals or the Blue Jackets kept in line. Crosby is a good player.

The team that wants it more tonight won. Heart. All Heart. Brainy Versatility. 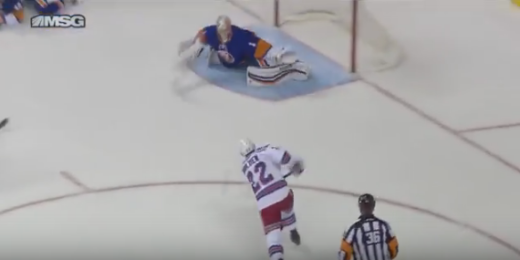 Barclays Center in Brooklyn New York. New York Rangers vs. New York Islanders. Rangers took an early lead in the 1st, but in the second quarter Islanders came back aggressively scoring two goals.They lead 2-1. Defensive player, Nick Holden, scored the 1st goal of the game for the Rangers. Islanders Left Wing, Andrew Ladd, scored two goals along with the Center, Anders Lee, who scored another goal to put them up. Battle of NY here, who going to win this?

Going into the last quarter the Islanders are still wining 2-1 with under 17 mins left. Long game to go, so it is still close. Looking like Islanders going to win this battle, BUT can’t say so yet still some hockey left to play. Hockey on a Thursday night. Puck it out, LOL. Who going to show up and close out the game? The Goalie, Defense man, Left or Right Wing or the Center? We will see. The game is close and we will see what will happened, hmmm.

Blue Jackets be jacking teams up, at least they did tonight. Toronto Maple Leafs, another member of the group that got jacked up by Blue Jackets. Blue Jackets may of let the New York Rangers get by with a win recently at home, BUT on Wednesday night they was not letting this home game go away easy. They smelled blood and they attacked. Toronto had no chance. The game was getting out of control in the 1st quarter with the Columbus Blue Jackets leading 2-0. Both teams are good but Blue Jackets ready to jack someone up, LOL.

Nationwide Arena in Columbus, Ohio was going to be live this Wednesday for this game. Blue Jackets scored five goals. Boone Jenner, the Center, scored a goal. Zach Werenski had 2 assist and the Goal Tender, Joonas Korpisalo had 31 saves to get the Blue Jackets this win at home. Both Right Wing, Olive “O” Bjorkstrand and Josh Anderson scored a goal. Both Left Wing, Nick Foligno and Matt Calvert also scored goal. Tonight game was a Wing game because both Wings dominated on the Maple Leafs.

Of course, the Maple Leafs scored, 2 goals to be exact. It was too late though. Blue Jackets scored 2 goals in the 1st and 2nd quarter. That alone in itself made the game over with. Those two quarters were nighty night for the Toronto Maple Leafs. Columbus made up for their game; they let go against the New York Rangers the other day by totally taking it on the Maple Leafs. They did good. 😀 They played good. They responded well:D.