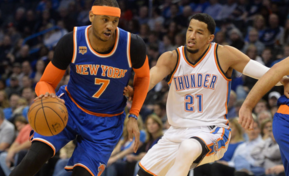 Carmelo Anthony didn’t play good the last time. Knicks played OKC, BUT on Wednesday night Melo was on fire. Scoring 19 in the first quarter only and the Knicks had the lead big — 17 points, Knicks lead. OKC fighting back and cut the lead down. Andre Roberson have no answer for Melo is…is on Fire. Blazing hot! On the night Melo finding out he is on the All Star Team, he made it known the All Star coach decision was a good one. But OKC Thunders came back and making the game close. 56-52 Knicks in the second quarter till the Thunders took the lead.

You already know Russell Westbrook was going to do his thing. He is a

Russell Westbrook in 29 minutes, had 11 rebounds and assists and 27 points only in the 3rd quarter. The Thunders wasn’t playing tonight. They let the Knicks feel themselves like they were going to win earlier on in the game. But Westbrook with the Flush Dunk. Steals and dunks by Westbrook. Thunders comeback from the deficits and won at home. Home win! Triple Double Westbrook. Thunder up for the win. Westbrook dropped 38 points and Carmelo Anthony scored 30 points.

Westbrook and Durant beef. Durant back in OKC after he left in the off season. This show down is about to go down. Mic drop..Oooooooo. The beef is already being hyped. Just waiting for the game at 8PM. This game is about to be good so muuch emotional going down. Durant (probably) going to get booed. Kevin Durant is emotional; so lets see how he takes it. If he tries to take over the game then Warriors might lose because this is a team game. Team game wins in the NBA. Russell Westbrook is going to give someone fist today just saying my pre-game view. 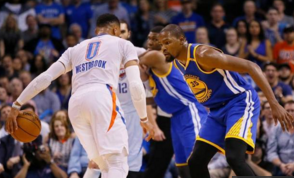 In game view, Durant getting booed. The game started off with Thunders scoring the points and taking an early lead. But there was too much fire power. The Warriors had too much talent for the Thunders to handle. The blow out was at half time and got worse in the third quarter then got better a little. Warriors dropped 43 points in the 2nd quarter like fireee power. This game was over by half time.It looked worse in the 3rd quarter too. That was how it looked. Warriors was not phased at all so I thought. They came to handle business and they did just that but Thunders looked like they coming back a little. Westbrook was doing do his thing, but too much offensive weapon from the Golden State (but he was putting in work). Thunders at home advantage couldn’t stop the fire power; I would say then started slowly them down a little cutting the lead down. Thunders turned the D up in the 3rd quarter. Westbrook giving Durant the work every time when Durant guards him. I know, Westbrook wanted this W soooo bad too, like who wouldn’t like? Come on, fa real.

Westbrook was guarded by Durant (pshhh). Durant can’t guard Westbrook. Durant was doing his shake and bake though and making a 3 right in Domantas Sabonis grill.That is Arvydas Sabonis’ son, by the way. One of the greatest skilled Center of his time. But yeah, back to Westbrook. He is good but he has too much heart which can be very detrimental because of pride. Got to love Westbrook though. Man, he got heart. Talking trash to Durant and Westbrook did dropped buckets on Durant. Heart is good but too much heart can be detrimental to having heart. When Westbrook learn how to control it and use it to straight destroy his opponent watch out for him. Oooo! That’s scary to think about. 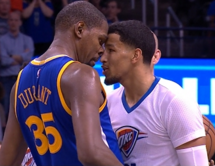 On to Kevin Durant, Durant want this game bad, I heard. Thunders closing in from the blow out score. The game got a little physical by the end of the third quarter if you want to say that. Durant and Andre Roberson got into it, but (Come on!?) Durant needs to sit down on that on, so does Roberson too (pshhh). If you not a tough guy chill with that. Westbrook end the quarter with crossing Andre Iguodala up and dunking the ball.This game is still a blow out though 105-88 Warriors. Thunders made a run and brought the deficit to 12 points BUT the Warriors pulled away. This game was over by the 90 second time in the 4th quarter — 130-114 final score. Durant trying to act all hard after the game like he didn’t care about his former teammates (major SMH). Durant try so hard to be hard when he is emotional, LOL. Be who you are — your true self.

Be comfortable with yourself. Interesting game to watch. Brainy Versatility.

This was a good game. Oklahoma City Thunders did their team. They came to play tonight, I must say. Kyrie vs. Westbrook. OKC led the 1st quarter and the Cavs lead at the half. But Thunders came to play tonight especially at home. I mean, Kryie did drop 28 but that wasn’t enough to stop the Thunders. Both team was shooting high percentage regarding to 3’s. And, OKC lead well assaulted the Cavs in the rebound category leading 51-35 in rebounding. 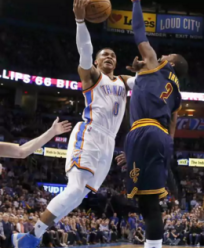 In all, Thunders won by 9,118-109. Holding the Cavs to an L. Probably, Lebron going to be talking more trash about his team now. He loves that drama. Thunders handle their business at home and on to the next team. I know Westbrook ready for that game on Saturday. Durant going to get dunk on by Westbrook (probably). I want to see how this is going to play out in pre-game. Westbrook doesn’t hide his feeling so we see.

The game between the Cavs vs Thunder. The came end in the 1st quarter with the Thunders wining by 3 in the first quarter 24-21. The Cavs took over the second quarter dropping 37 points in the quarter to be up 58-45  Cavs by half time. The thunders made it close quiet a bit by the end of the 3rd quarter. Irving was shake and baking in this game. Crossing a guy and off to the easy lay up. The game was close sometimes during the game but the Cavs keeps pulling away.

It is simple thunders cant stop Kyrie Irving to be honest. Kyrie been balling like 6 games. 29 in this game with 10 assists. He keeps on getting mismatch and dominating those mismatches. Looking at defenders in the eyes as he crosses him or shoots a three right in their grill. Westbrook was the best defender on him but he cant play the whole game on him with all the picks and roll. Lebron was is normal self he just Lebron, LOL. To me Lebron is known for his passing in which I saw two nice ball movement passes one for a dunk and the other for a 3. Lebron had 25 points, 8 assists and 14 rebounds.

You know Russell Westbrook was going to do his thing getting a triple double. Mess around and got a triple double. 20 points, 12 rebounds and 10 assists for the stank face killer. He had no help though. Thunders wasn’t not making no 3’s this game. Well nothing valuable to help this game out. Westbrook was by himself. You know the game over when Thompson making a jump shot, LOL. 19 points, 12 rebounds and 4 steals for Thompson. That is good for a big man especially 4 steals for a big man. Yikeees! Shut out to Canada and Canadian :D. This game was a blow out really most of the game. Thunders keeps coming back but they couldn’t find that last push to get over the top. The back up came in the game but I like that back up point guard for the Cavs Felder. Watch him in college and he was something to mess with it. Tough small player. He got heart. Cavs won the game 107-91. Fun game to watch.

You can learn new things when you watch a game so be adaptive. Brainy Versatility.