This game I thought the Spurs was going to win BUT I was wrong. The game was close to the end. I thought the San Antonio Spurs was going to pull away with the lead. The New York Knicks was sticking around and leading most in the game. Spurs didn’t have their normal game this Sunday Afternoon game. Kawhi Leonard was making clutch shots in this game. Knicks’ defense came through at the end though; their offense did some damage too. 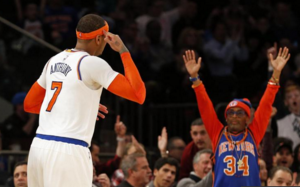 Willy Hernangomez is a good player and a finesse player making acrobatic lay up and dunks. He can get double figures and a good center for the Knicks. Good young guy for the Knicks to have; however, this game was Melo game though. Carmelo Anthony put the fist in the heart of the Spurs with his 3 point to put the Knicks even further after the steal on the other end by the Knicks. The game was still close though Melo and Kawhi going at it.

Melo end the game with his mid range jumper. The game was in the hands of the Knicks to win. This win will be their biggest win of the year. Well the season, so yeah and they did it! They won and close the game out in Madison Square Garden on Sunday Afternoon. This game was a good close finish. Melo got clutch in his veins. He led his team to victory this game. Heart and being clutch. Knicks won by 4 94-90.